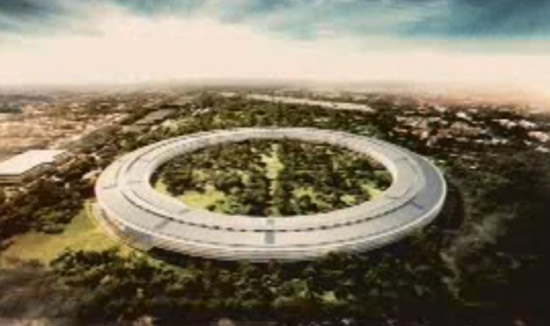 Apple aims to build new facilities for its headquarters. The project, as standard as it is, was presented this Tuesday by Steve Jobs to the municipal council of the city of Cupertino.

This is a busy week for Apple and to say the least. In addition to having present his new products this Monday, the firm is currently busy validating a mga construction project relating to its low Cupertino campus. The project is standard, the new building must be able to accommodate 13,000 people but includes specifications that reflect the spirit and aesthetics of Apple such as a certain respect for the environment.

In fact, the new building where the future vessel will be (the view of the photo above, this is what you might think) would be eco-friendly. Steve Jobs who does not lack arguments to push the city council to accept his project indicates that the increase in greenery would be of the order of 350% on the plots purchased, that there would be 60% of trees, -90% parking, -30% footprint for buildings.

In short, a project which has something to seduce but which still has to convince. For this last point, Steve Jobs wants to be very clear, “if we want to stay at Cupertino (if we want to stay Cupertino), in other words, the boss of Apple wants to be slightly threatening and does not lack elsewhere to recall that his firm is the first taxpayer in the city when the municipal councilor asks him what would be the interests that the citizens of this city could derive from this colossal project.

In addition, another member of the municipal council asks him in a slightly humorous tone if the citizens could profit free from Wi-Fi thanks to the arrival of the new buildings, to which answers Steve Jobs that Apple pays taxes and that it is rather the role of the city to deal with this. On the other hand, the Apple strongman was not lacking in distribution when he replied that he would be happy to offer Wi-Fi for free, if his firm had more tax to pay.

Another amusing detail, another person from the municipal council asked him – while showing him his iPad 2 – if Apple intended to open an Apple Store in its general district.

If the project is accepted, the mega site should already start this year. The duration of the works is estimated at 4 years.

Steve Jobs' video in front of the Cupertino city council: